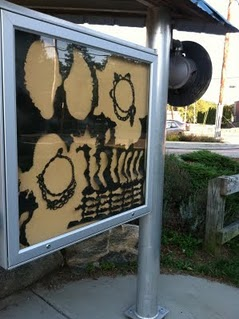 Islay Taylor is the current exhibiting artist at The Worlds Smallest Art Gallery, a tiny little kiosk in Peace Dale situated on the Washington County Bike Path. She has put a selection of laser cut pieces of jewelry on display, along with the larger sheets of scrap neoprene that the pieces have been cut from. She likes the concise framing of the presentation, it makes the work on display look otherworldly.

Thanks to John Kotula for taking on this fun project that gets art out of the gallery and into the public sphere!
Posted by Hera at 12:03 PM No comments:

"Liminal" is not a commonly used word, but its various meanings are filled with artistic possibilities. "Between," "transformation," and "dislocation" are some. "Liminal" refers to that period when things are in transition, when possibilities for danger, change, and mystery exist in equal measure. It is also the defining feature of a new exhibition of works by Lin Lisberger, Michael Yefko, and Phyllis Ewen in an appealing exhibition on display at the Grimshaw-Gudewicz Gallery at Bristol Community College.

Anything "liminal" offers possibilities, challenges and perspective. The three artists, using visually similar materials but with vastly different approaches, all gaze at the intersection between the natural world and our involvement in it with curiosity and reticence.

Read the rest of the article by clicking here.

Review: Picking out a cornucopia of gallery highlights this fall

...A bit farther afield, the artists of Hera Gallery in Wakefield are exhibiting as part of an exchange with AS220 in Providence. The show, "Hera Works," running through Saturday at AS220 Project Space, serves as a sampler of new work by 16 Hera artists. (AS220 artists will reciprocate at Hera later this fall.)

Eclectic and edgy, the exhibition illustrates Hera's strengths as one of the most consistently provocative arts collectives in Rhode Island. Among the most powerful works on display are slightly disturbing and surreal but strangely compelling pieces by Claudia Flynn and Hera Gallery Director Islay Taylor.

Flynn's "Danseur Noble," in which she combines a piece of driftwood with the plastic head of a doll, is a striking coupling of found objects - one a gift of nature, the other a thrown-away toy that resonates with lost innocence and the ravages of time. The forms work together to create an expressive, emotive whole. Every viewer may see something different in the doll's expression, but a certain toughness and stoicism - and, yes, nobility - come through, a sense of surviving despite hardships, suggested by the full extension of the driftwood's four limbs.

Equally creepy and captivating are Taylor's pieces of jewelry-like brooches titled "Biopsy," referencing samples of living tissues cut from the body for the purpose of diagnoses. Made from plastic, glass, retro-glo thread, enamel, copper and surgical steel, the brooches stick to a wall like large barnacles and are jarringly depicted in a photograph affixed to a woman's body, the white forms repeated on a white shirt in a scene that both disturbs and fascinates.

Using found or reclaimed objects, artist Troy West creates an eloquent plea from nature that alludes to manmade environmental disasters like the BP oil spill. The piece, "Apocalypse," made from wood and copper, combines text and an abstracted shore bird in a simple construction that serves as a poetic call to arms in the fight against societal indifference.

>Read the full article here.
Posted by Hera at 12:08 PM No comments:

Review: 'This American Life' lies at the heart of Hera Gallery exhibition

WAKEFIELD - Two artists take different paths as explorations of America's living spaces in the latest exhibition at Hera Gallery. "Alexandra Broches: Landscape" and "Michael Yefko: Shed," each occupying a separate room in the gallery, are wildly different in approach, technique and execution, yet complement one another as expressions of cultural identity and the impressions that we make upon a place.

Broches presents a new series of color photographs - eight in all - each 32 by 40 inches. Despite their large size, the photos act almost as subversive postcards, given their concentration on sense of place, distinctive detail and some ephemeral sense of nostalgia, longing or memory.

"Liberty, Delmarva Peninsula" is a striking image of an undersized replica of the iconic statue spied by commuters out the window of the Staten Island Ferry, strangely placed in a nondescript patch of land in the unique convergence of Delaware, Maryland and Virginia properties that make up the peninsula. The sky dominates, diminishing the statue, which, although centrally positioned, seems just another element in the landscape, equal to the surrounding cell tower, telephone poles and street lights.

"Horse Ride, Virginia Beach" is even more ambiguous. The title is derived from the lone sign on a stretch of sandy beach. The sign, propped up against an empty metal corral-like enclosure - the kind you see at carnivals - reads "Horse Ride" with blank space underneath, presumably to chart times for the ride. The emptiness of the scene - sand with a few footprints, ocean, sky and the missing horse ride - evoke a number of feelings, from mystery to nostalgia. Is the ride a relic, a remnant of tacky beach day fun gone by, or is it merely on winter hiatus until the crowds return?

>> Finish reading the article here.
Posted by Hera at 12:03 PM No comments:

Preview our recently released book, HERA2010, which features our current membership and an introduction by Katherine Veneman.

Click the links in the preview window for more information. Or click here to go to Blurb.
Posted by Hera at 11:24 AM No comments: 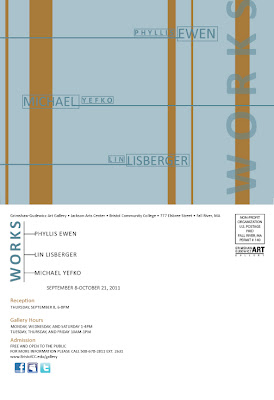 Alexandra Broches will be presenting new photographs at the Wadleigh Gallery at Chester College of New England. The show will open on September 6th, and will run through October 6th; with an opening reception on the evening of Wednesday September 14th at 5:00pm. 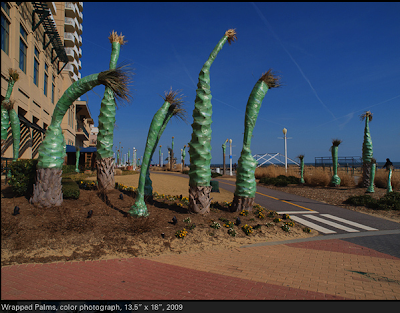 Hera Gallery member, Mara Trachtenberg, will be presenting her series Photographs from A Decadent World at Krause Gallery in Providence. The show ill be up from September 8th through the 23rd, with a reception on September 15th from 5:00 - 9:00pm. Please visit www.mosesbrown.org for more information and directions to the show. 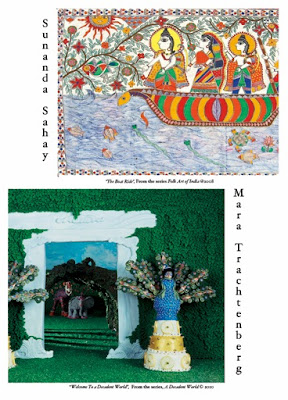